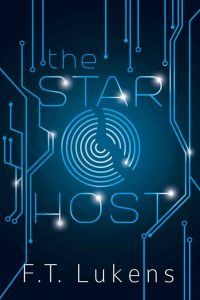 Ren grew up listening to his mother tell stories about the Star Hosts – a mythical group of people possessed by the power of the stars. The stories were the most exciting part of Ren’s life, and he often dreamed about leaving his backwater planet and finding his place among the neighboring drifts. When Ren is captured by soldiers and taken from his home, his dream slips further out of his grasp. Now a slave of a despotic Baron, Ren must remain inconspicuous while plotting his escape. It’s a challenge since the general of the Baron’s army is convinced Ren is something out of one of his mother’s stories.

Ren finds companionship in the occupant of the cell next to his, a drifter named Asher. A member of the Phoenix Corps, Asher is mysterious, charming, and exactly the person Ren needs to anchor him as his sudden technopathic ability threatens to consume him. Ren doesn’t mean to become attached, but after a daring escape, a trek across the planet, and an eventful ride on a merchant ship, Asher is the only thing that reminds Ren of home. Together, they must warn the drifts of the Baron’s plans, master Ren’s growing power, and try to save their friends while navigating the growing attraction between them.

Absolutely one of the best YA-SciFi novels out there, The Star Host was too enjoyable I’ve read it in one sitting and would devour the sequels immediately. Highly recommended for those who love an action-packed science fiction with diverse and queer characters.

I really liked Ren as the MC. A duster-boy from a backwater planet, who loved daydreaming to fly on the space one day among the stars and the Broken Moon. A good brother with protective streak and had saved Liam, his half-brother, from being taken and sacrificed himself to be one of the slaves of a tyrannical Baron. But then he found his hidden-abillity as a technopath and was believed to be a dangerous weapon among the powerful star hosts.

I also liked Asher, the captive drifter & Phoenix soldier whom Ren met next to his cell. He seemed to love teasing Ren with his sarcasm but gradually became Ren’s supportive partner and anchor in the end. Bonus point, there was a slow burn romance going on between Ren & Asher, although I think their relationship would be developed more by the author in the next book.

What’s your opinion on The Star Host novel? Please let us know in the comments below.