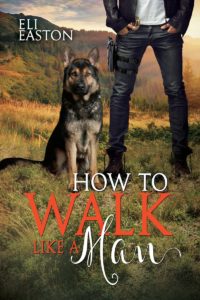 Part of Book Series: Howl at the Moon Series

Summary: Deputy Roman Charsguard survived Afghanistan where he lost his best friend—his K-9 handler James. Roman was a military dog until two years ago when he developed the ability to shift into a human. It’s not easy to learn how to be a man. He found a place to live in Mad Creek, a haven for the secret world of dog shifters. Finding a reason to live has been harder. That is, until a certain human walks into the Mad Creek Sheriff’s office and starts making trouble.

Matt Barclay has the worst luck. First he was shot in a SWAT drug raid, then he was sent as DEA investigator to Mad Creek, a little town in the California mountains. Matt’s job is to keep a lookout for illegal drug farms, but nobody in the town wants him there. And then there’s Roman, Matt’s erstwhile baby-sitter. He’s the hottest guy Matt’s ever seen, even if he is a bit peculiar. If the town doesn’t kill him, sexual frustration just might.

Out of the four titles in this series, THIS I loved the most. First off, the protagonist is a virgin, and not just any virgin, it’s an innocent one for pete’s sakes who later discovers amazing things he can do with his body *wink-wink* and how finding love can be an adventure-filled ride.

What’s your opinion on How to Walk like a Man novel? Please let us know in the comments below.