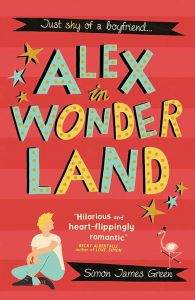 In the town of Newsands, painfully shy Alex is abandoned by his two best friends for the summer. But he unexpectedly lands a part-time job at Wonderland, a run-down amusement arcade on the seafront, where he gets to know the other teen misfits who work there. Alex starts to come out of his shell, and even starts to develop feelings for co-worker Ben… who, as Alex’s bad luck would have it, has a girlfriend.

Then as debtors close in on Wonderland and mysterious, threatening notes start to appear, Alex and his new friends take it on themselves to save their declining employer. But, like everything in Wonderland, nothing is quite what it seems…

Alex in Wonderland was a cute & sweet as heck rom-com with a side of mystery sublot. Plot-wise, it was better than Simon James Green’s other books, Noah Can’t Even and Noah Could Never. But it was as funny & hilarious, still made me laugh and giggles at the silliness of Alex the MC’s misadventure in Wonderland.

Like Noah Grimes, I found myself fallen in adoration with Alex Button. He was not only painfully shy and socially awkward, but also a disaster gay. Reading his clumsy ways to get his crush reciprocating his feeling . . . I couldn’t even. But I was rooting for him from the beginning and so happy when he finally got together with his crush in the end~ ♡

The mystery sublot in Alex in Wonderland was also enjoyable. It had a twist I wouldn’t have guessed and was really not expecting at all. There was a hopeful aftermath, but it also ended abruptly.

Well, if Alice could come back and had another adventure in the following book, hopefully so could Alex Button. Here to hope Simon James Green will write and publish the sequel next~

What’s your opinion on Alex in Wonderland novel? Please let us know in the comments below.