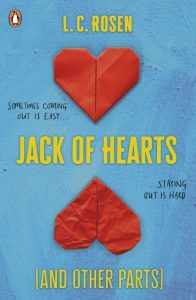 Novel: Jack of Hearts (and Other Parts)

Summary: My first time getting it in the butt was kind of weird. I think it’s going to be weird for everyone’s first time, though.

Meet Jack Rothman. He’s seventeen and loves partying, makeup and boys – sometimes all at the same time. His sex life makes him the hot topic for the high school gossip machine. But who cares? Like Jack always says, ‘it could be worse’.

He doesn’t actually expect that to come true.

But after Jack starts writing an online sex advice column, the mysterious love letters he’s been getting take a turn for the creepy. Jack’s secret admirer knows everything: where he’s hanging out, who he’s sleeping with, who his mum is dating. They claim they love Jack, but not his unashamedly queer lifestyle. They need him to curb his sexuality, or they’ll force him.

As the pressure mounts, Jack must unmask his stalker before their obsession becomes genuinely dangerous…

I didn’t even know about the existence of this book until one day before I started reading it. It came up in a conversation as an inside joke () and something about it made me curious. I looked it up, the cover put me off instantly (the other one, not the nice cover I uploaded here), but I read the synopsis and I was like wait a minute! This sounds interesting. Yet, I was pretty certain I would not like it. I was thinking this is going to be too rose tinted, too rapey, too Stockholm syndrome. I will admit I went into this with a ‘let’s see how bad it is’ mindset.

And I was so freaking wrong.

This book is simply amazing! We have Jack who’s a darling and I felt for him so much, and then we have Jenna and Ben, his best friends, who are great friends, and then there’s everyone else (not the school director, he is the embodiment of everything that’s wrong in the world and not the stalker, but that’s self explanatory) that Jack comes in contact with. Intimate or not.

I was surprised to discover this book deals heavily and in depth with bullying and stalking. I was honestly so anxious for Jack throughout the novel. He was put in a very difficult position and I actually agree to (almost) every decision he made. It’s really sad to admit, but authority figures are useless and a waste of breath when it comes to people they don’t agree with, that don’t conform to their own ideas, who don’t talk, dress and behave the way they want them to. The book did a very good job portraying these things, and it made me angry. It’s so true it hurts.

But then we have gorgeous Jack who is great. The book is dusted with all kinds of right things too and I think it’s a good educational read for anyone who is interested in safe sex, bullying and in what way(s) the society sucks. It answers some valid questions that I think most people ask sometimes, or don’t even know they needed an answer for. I could recommend this book purely from a sex ed point of view, to be quite frank.

And then there’s the mystery around it. Who sends those love letters to Jack? Who is hurting him so bad? What kind of a deranged person would do that? The mystery stays with us until the last few pages. I wasn’t surprised about the reveal, but I must say the book did a pretty good job to shift the attention towards other suspects. The truth is, anyone can be a stalker, anyone can be a bully, and people should open their ears and listen when someone opens up to them and seek help.

As I already said, I agreed to almost everything Jack did. It was not ideal, it shouldn’t have happened at all, but facing authority figures who don’t believe him and being threatened and afraid, he did the best he could, he managed the situation the only way he could think of. What really got to me was how he thought about it, how it broke him and how he saw no way out of it except for going on with it, for changing everything about himself to conform to his stalker’s standards. This was the hardest part to read. It made me so sad and I completely understood how powerless Jack felt.

This is a novel worth reading from every point of view. It is shattering and it will make you feel things.

What’s your opinion on Jack of Hearts (and Other Parts) novel? Please let us know in the comments below.