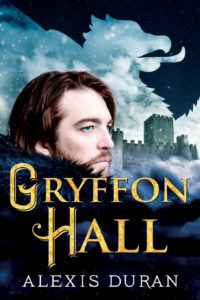 Fated to be born the useless fourth son of the Lord of Glimmerveen, Wryler dreams of getting married and escaping the rustic confines of his father’s castle. A wealthy merchant’s son seems to hold the key to Wryler’s safe if somewhat dreary future. However, the arrival of a mysterious stranger on the eve of Wryler’s betrothal sends his plans into disarray and Wryler finds himself traded off in marriage to one of the most notorious rogues in the land.

Is Lord Aeric Rouchet the scoundrel he appears to be, or is he something much worse? Separated from his family and thrust into a strange and dangerous new life at the foreboding Gryffon Hall, Wryler must unravel the secret of his husband’s shadowed life and defeat the curse which threatens not only his growing affection for the barbarian in his bed, but the lives of everyone the Lord of Gryffon Hall is sworn to protect.

I didn’t expect to like this as much as I did, but the characters were such charming individuals. Aeric, despite being described as a barbarian in Wryler’s eyes, is a surprisingly gentle person, always giving Wryler a choice. And Wryler, who comes across as a terribly fickle person in the beginning, shows an adamant refusal to take things at face value, which redeemed him in my eyes. He refuses to accept the bad things being said about his betrothed without seeing any evidence for himself, even if he sometimes does think of Aeric as uncivilized. He still has his own misconceptions, but he still strives to cast judgments on Aeric on his own terms, rather than letting the rumors whispered by other people influence him.

Aeric and Wryler as a couple are pretty adorable – like a fairytale version of the nerd and jock dynamic. Their interactions are teasing and full of banter, but there’s an underlying tenderness to it all. Plus, the sex was hot! When they consummated their marriage… That made me want to fan myself. I only wish this book was longer, because I wanted to read more about their lives as a married couple, even if the book does end quite nicely. I just wanted more daily interactions.

What’s your opinion on Gryffon Hall novel? Please let us know in the comments below.