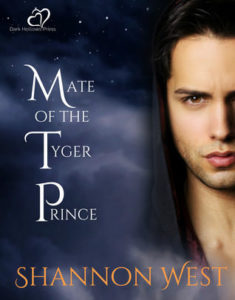 Novel: Mate of the Tyger Prince

Part of Book Series: Mate of the Tyger Prince #1

Summary: Diplomatic marriages between two members of different planets certainly aren’t unheard of—but for Prince Mikos of Tygeria and Col. Ryan Donnelly of Earth, it might just be a fate worse than death. The union is meant to end a devastating war that has lasted for over a hundred and fifty years, but when the female bride intended for the fierce, sexy prince runs away, her handsome brother is substituted instead. Men are for mating as far as the Tygerian prince is concerned, but the colonel also happens to be Mikos’s sworn enemy, not to mention being completely irritating.

Ryan is horrified to learn that the Tygerians not only expect him to take the place of his sister, marry the Bloody Prince of Tygeria, and go to live with him on his mysterious planet, but they also expect him to undergo physical alteration to have the man’s baby! And nobody is taking hell no for an answer. Ryan’s being asked to turn his whole life upside down and the handsome Tygerian gets under his skin like nobody else. But with the fate of the universe at stake, how can he say no? Can the two enemies put aside their differences and focus on making love and not war—not to mention a baby? As a powerful love struggles to take root, can they learn to trust each other and stand together against the forces that are trying to tear them apart?

Post’s Author Opinion:
Note: This is a personal opinion, it does not reflect YaoiOtaku’s official position towards the novel.
I Love this sci-fic book and feel it’s a perfect series, specially if you like the outer space and aliens’ lovers. Reading whole 5 books is like going to a theme park and riding 5 different roller-coasters. I’m a fanboy so I can’t see anything bad in this series <3

What’s your opinion on Mate of the Tyger Prince novel? Please let us know in the comments below.