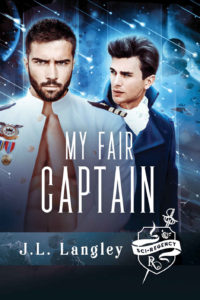 When Intergalactic Navy Captain Nathaniel Hawkins goes undercover to investigate the theft of an IN weapons stash, the mission raises painful memories from his past. Using a title he fled nearly two decades earlier, Nate once again becomes the Earl of Deverell, heir to the Duke of Hawthorne, in order to navigate the ins and outs of a Regency world. But planet Regelence—where young lords are supposed to remain pure until marriage—has a few surprises for Nate, not least of which is his attraction to Prince Aiden.

A talented artist, Prince Aiden Townsend isn’t interested in politics and the machinations of society gentlemen, and he adamantly rejects the idea of marriage and a consort. Aiden wants the freedom to pursue his art and determine his own future. But the arrival of the dashing and mysterious Deverell awakens feelings of passion and longing the young prince can’t deny.

As Nate uncovers a conspiracy reaching far beyond the stolen weapons, his future is irrevocably altered by the temptations of a life he never thought he could have. Drawn into the web of intrigue, Aiden is in danger of losing his life… and his heart.

Reading the second edition of My Fair Captain felt like nostalgia punching me in the face. In the years leading up to the reissue of this series, I’ve read all three previously published books time and time again. J.L. Langley is a very special author to me – her Without Reservations novel is the first M/M book I ever bought and read – and her books are among my favorite comfort reads.

Aiden and Nate’s story can and does feel cliche at times but I still undoubtedly adore them. They have fantastic chemistry, and their romance is sweet with just the right amount of steam. (Piercings, anyone?) I’ve never read any of the classic historical romances by authors such as Jude Devereaux, etc., but to me, Aiden and Nate’s romance still felt true to the themes and the spirit of historical romances. Aiden is by no means a helpless heroine, but he’s still a bit innocent and curious when it comes to the more, um, erotic stuff. Nate comes across as the archetypal bad boy type in the bedroom, but he’s dependable, loyal, and steadfast. They’re perfect for each other.

This second edition is much more polished as well, in terms of writing. Conversations feel more natural, and the sentences are less choppy and they flow much better. The overarching plot of the series feels more clear to me now. I remember being confused about the political intrigue when I read the first edition all those years back; I wasn’t quite sure how certain people and certain plot threads were linked to each other. They’re all much more clear after the revisions done in this edition.

Certain things were thankfully expanded upon as well. Particularly Trouble’s past and his parents. Let me just say, I still giggle over Rexley and Trouble to this day. They’re definitely my favorite characters in this series – and I do love all of J.L. Langley’s heroes – and I can’t wait for their book, too.

That’s not to discount the more problematic aspects of this series and the society that the author has created, though. Just the patriarchal nature of the societies highlighted in the Sci-Regency series can raise a few eyebrows. And there’s a sordid lack of female characters introduced. Muffin is the only one of note in My Fair Captain. If I remember correctly, though, more will be introduced in the coming books. Or so I hope.

I’m still definitely in love with this series, as much as I was in love with it when I was younger. I’m excitedly waiting for the next books.

What’s your opinion on My Fair Captain novel? Please let us know in the comments below.