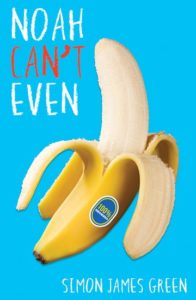 Poor Noah Grimes! His father disappeared years ago, his mother’s Beyonce tribute act is an unacceptable embarrassment, and his beloved gran is no longer herself. He only has one friend, Harry, and school is…Well, it’s pure HELL. Why can’t Noah be normal, like everyone else at school? Maybe if he struck up a romantic relationship with someone – maybe Sophie, who is perfect and lovely – he’d be seen in a different light? But Noah’s plans are derailed when Harry kisses him at a party. That’s when things go from bad to utter chaos.

Noah Can’t Even was funny, hilarious and sweet. A humorous YA story that really brought out the smile and laughter. Yet, I couldn’t help but also feel the second-hand embarrassment, reading these silly misadventures and over-the-top family drama that happened in the teenage life of Noah Grimes.

Ah, Noah. Our geeky MC. Cute, awkward, and adorkable. He saw the world in cynical yet naïve voice. He was academically smart, but his decision-making couldn’t be trusted. He wanted to be normal and popular at school, but most of his peers and their parents only knew him as “that ridiculous kid who lied about his dad being kidnapped by pirates”, seriously. His antics sometimes could be annoying and cringe-worthy, but I still found him lovable. He was oh-so-relatable, my favorite character.

Aside the family drama and school problems, Noah Can’t Even also had a sweet romance for our MC with his BFF, Harry. Although it felt a bit frustratingly short and not enough development showed on-page, but it still could grab my heart and make me squee! Really lovely and shippable~ I love me more Noah & Harry, the cute couple! ♡♡♡

I also liked the writing-style in Noah Can’t Even. Told in Third Person Limited Point of View, it was brilliant and well-written. Fast-paced and engaging. Very British and refreshing. I couldn’t put it down and once read the entire chapters in one sitting. And fyi, I have read Noah Can’t Even twice and still found it very much enjoyable.

What’s your opinion on Noah Can’t Even novel? Please let us know in the comments below.