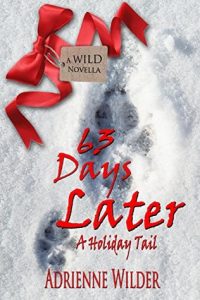 Summary: It’s been almost two years since Keegan and August escaped the Alaskan wilderness, and they finally get to celebrate their very first Christmas together. But their plans of peace and quiet get turned upside down when Santa leaves more than just presents under the tree.

Post’s Author Opinion:
Note: This is a personal opinion, it does not reflect YaoiOtaku’s official position towards the novella.

Worth of mentioning: this is not a classic Christmas story, there is no carolling, no actual Christmas festivities, none of that. And why would there be? That’s not who August and Keegan are.

After leaving Alaska, August and Keegan opted for a more secluded life. Being there for a far shorter period than Keegan, it was a little difficult for August to re-accustom to civilization, but nothing too hard. When it comes to Keegan, after spending around 10 years by himself in Alaska, it was more than hard for him to cope. We get to see Keegan trying to function in the middle of civilization, seeing how dependant of August he is when doing something as simple as going to the store and how he struggles to get over it, to be able to do things we usually don’t think twice about. I liked how the roles reversed; while Keegan helped August in Wild, here it is the other way around.

63 Days Later is a slice of life novella, a peek into August and Keegan’s life after Alaska, but if you think they are the stars of this one, you are wrong. The true star is Daisy, the wolf Keegan rescued as a puppy and that August got to love so much that they brought her back with them. In a way, this is the perfect Christmas story, it warms you up and, I don’t know you, but it made me like everyone even more.

What’s your opinion on63 Days Later: A Holiday Tail novella? Please let us know in the comments below.