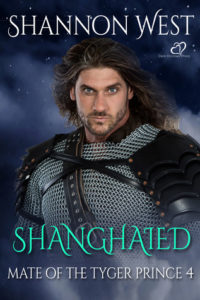 Part of Book Series: Mate of the Tyger Prince #4

Summary: Prince Vannos is sick and tired of being sheltered and treated like a child. He’s a warrior and in his opinion, it’s high time he was treated like one. When he’s invited to a party by one of his older friends, he decides to slip away from his guards, even though his father, Blake, has forbidden it. The next thing he knows, he’s been drugged and kidnapped and is on his way to the planet of Moravia, an insular world, whose people are suspicious and hate outsiders. When Vannos learns why he’s going and what awaits him there, panic sets in, but it’s already far too late.

Soon he arrives on the mysterious planet, surrounded by strangers who don’t know his real identity, but if he tells the truth about who he really is, harm will come to his family at home. Forced into a charade, Vannos has to marry the king of Moravia, a handsome warrior king named Stefan. He must also pretend to be a man who is far more worldly in every way. When the truth is inevitably revealed, the king is angered by the idea that the Tygerians tried to force a political alliance on him and refuses to give Vannos a divorce or allow any member of the royal family to visit him.

Redmond is dispatched to act as a go-between and he finds much more waiting for him than just an lovestruck and unhappy prince in this distant world. The two young men must fight their way to happiness through a confusing maze of romance, murder and intrigue, and Vannos and his king learn that you have to be very careful what you wish for in life, because you just might get more than you ever bargained for.

Post’s Author Opinion:
Note: This is a personal opinion, it does not reflect YaoiOtaku’s official position towards the novel.
Shannon achieved a very beautifully written story with this one.The most important thing about this novel is, it’s fresh! What I especially love about this series is it’s been 4 books so far and there are 3 different world settings and I absolutely adored that fact. Favorite excerpts from the novel:

“He was a boy who needed a cock in his mouth or his ass the majority of time. He’d have to see what he could do about that.”

“I’m so fucked,” Redmond muttered, half under his breath, putting his forehead in his hand. Behind him, a voice said, “Not yet, but I’m working on it.”

What’s your opinion on Shanghaied novel? Please let us know in the comments below.