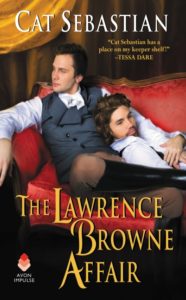 Lawrence Browne, the Earl of Radnor, is mad. At least, that’s what he and most of the village believes. A brilliant scientist, he hides himself away in his family’s crumbling estate, unwilling to venture into the outside world. When an annoyingly handsome man arrives at Penkellis, claiming to be Lawrence’s new secretary, his carefully planned world is turned upside down.

Georgie Turner has made his life pretending to be anyone but himself. A swindler and con man, he can slip into an identity faster than he can change clothes. But when his long-dead conscience resurrects and a dangerous associate is out for blood, Georgie escapes to the wilds of Cornwall. Pretending to be a secretary should be easy, but he doesn’t expect that the only madness he finds is the one he has for the gorgeous earl.

Can they find forever in the wreckage of their lives?

Challenging each other at every turn, the two men soon give into the desire that threatens to overwhelm them. But with one man convinced he is at the very brink of madness and the other hiding his real identity, only true love can make this an affair to remember.

Honestly speaking, I enjoyed this second book a lot more than the previous book in the series, The Soldier’s Scoundrel. I think it’s because I connected more to Georgie and Lawrence as characters, and because their internal struggles were a lot more relatable to me than the struggles of Jack and Oliver. While reading, there were a lot of times where I found myself wanting to reach out, maybe hold Georgie’s and Lawrence’s hands, and wrap blankets around them to keep them safe and warm. That’s how much I was affected by their problems and struggles. Thankfully, they had each other, and their love for each other ultimately changed them for the better. That was terribly sweet. For me, there was really no doubt that they belonged with each other.

There was also no pesky mystery subplot that distracted me from the main point of the story, which is of course the romance. While there were some points of intrigue that interested me, such as the situation around Penkellis, ultimately they didn’t take up much space in my mind and I found the conclusions and resolutions to these points of intrigue to be satisfactory. All my questions were answered and I wasn’t left hanging. Some may perhaps find the resolution to the Mattie Brewster situation to be a bit rushed, maybe even not-quite-realistic, but I didn’t care. At that point I just wanted Georgie and Lawrence to have their happy ending. They’ve gone through enough already.

I have to admit that historical has never been a genre I’m fond of, but Cat Sebastian is turning out to be one of the very few authors determined to change my mind and my preferences. Her historical novels are a delight, and while there’s the underlying issue of the rampant homophobia typical of the period setting, all her happy endings are sweet and utterly believable. I’m definitely looking forward to reading more of her work.

What’s your opinion on The Lawrence Browne Affair novel? Please let us know in the comments below.