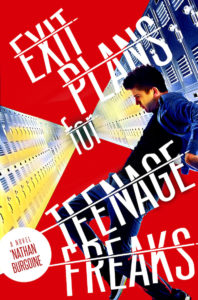 Being the kid abducted by old Ms. Easton when he was four permanently set Cole’s status to freak . At seventeen, his exit plan is simple: make it through the last few weeks of high school with his grades up and his head down.

When he pushes through the front door of the school and finds himself eighty kilometers away holding the door of a museum he was just thinking about, Cole faces facts: he’s either more deluded than old Ms. Easton, or he just teleported.

Now every door is an accident waiting to happen—especially when Cole thinks about Malik, who, it turns out, has a glass door on his shower. When he starts seeing the same creepy people over his shoulder, no matter how far he’s gone, crushes become the least of his worries. They want him to stop, and they’ll go to any length to make it happen.

Cole is running out of luck, excuses, and places to hide.

Time for a new exit plan.

Even from the first chapter I knew Exit Plans for Teenage Freaks would be an enjoyable read until the last line. With an interesting plotline about a boy who suddenly found himself capable to go poof anywhere by teleporting through a door, diverse secondary characters & important Deaf culture representation, some endearing male friendship moments between the MC & his ace BFF, and a cute romance subplot, Exit Plans for Teenage Freaks was really fun and exciting~

Although, aside from those favored points above, I still found some things questionable and needed more explanation. Such as, how Cole the MC seemed capable to influence people’s mind by unconciously transmitting his thoughts like, huh? Not only teleportation, but Cole also had telepathic impression now? And what about those guys in suit who were just staring creepily and then stalking him? What was their background story, anyway? Where were they exactly come from?

. . . But I guess, all will be clear and detailed in the sequel that the Author himself actually has prepared for next year(s), right? 😉

So, what’s your opinion on Exit Plans for Teenage Freaks novel? Please let us know in the comments below.