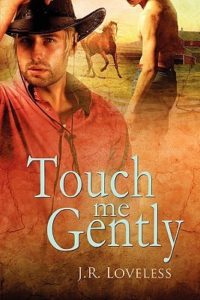 Summary: Always hiding his tormented past along with his scarred body, Kaden James finds it difficult to keep a job. Luck finally turns his way when he finds a job as a cook on a Montana ranch, where he meets terrifyingly handsome Logan Michaels. Logan is different from any man Kaden’s ever met, and before long, he finds himself falling in love with the big cowboy. But Kaden’s nightmares won’t let go of him so easily, and he’s not just jumping at shadows. He has nearly a lifetime of abuse, horrifying memories, and pain addiction to overcome. Can Logan’s gentle touch help Kaden heal inside?

Wow… This is book is too sweet. Completely lovable. Once i took it for reading, i couldn’t stop myself. It’s really heartbreaking (I literally cried couple of times), But also sweet & at few occasions funny romance. Writing of author is beautiful. Story builds up slowly & crafted nicely.

Author take us in a story of Kaden James, who is 19 year old & lives in New York. He is terrified of men who are bigger than him (Because of some past abuses) that often lands him in unemployment. After one such incident when he thought he is hopeless in finding jobs, manager of labour agency told Kaden that his cousin needs cook for ranch in Montana.

Kaden made up his mind & decides to give a try. In Montana he meets Logan (Awfully sexy hunk, with sexy green eyes & sexy sandy hair) & Shea (Logan’s sister, she has influence on Kaden) his new employers, horses & other workers.

Kaden really had trust issues but slowly he starts trusting Shea & Logan because they offered him unconditional love & support so he started to heal. There is another thing worth to mention, Mentacor ( A Horse) who is wild & distrust humans. but he manages to connect with Kaden as they are the same & both need healing.

The scene at before ending left me in shock, How could this happen..?

To Know it, read yourself 😀

What’s your opinion on Touch Me Gently novel? Please let us know in the comments below.