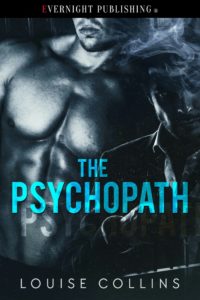 No two criminals are alike, and Quinn knows this more than most. After months of stress and pleading, his study has been approved. His participants all reside under one roof: Greenwood Prison.

The men sitting opposite him have done awful things, but Quinn’s not there to judge; he’s there to work through a psychopath checklist. He needs psychopaths for his study, and one participant fills him with more unease than the others.

Zane Black wears many faces, and Quinn has a hard time finding the real man behind the masks. He flirts, he manipulates, and boasts. He’s clever and takes control of their sessions. With all  Quinn knows about psychopaths, he can’t stop his heart being seduced by this one.

When the study finishes, will Zane let Quinn go and move on, or will he leave Quinn with more questions?

It was my first time reading Louise Collins’ book. The title and the cover had caught my interest first and I had expectation for some dark & twisted romance. Although I found later it was less dark and not that twisted, still I really enjoyed the story.

The Psychopath had Zane Black as the most intriguing character here. A murderer who was dangerous yet fascinating. A genius who could read people and manipulate them. Arrogant and shameless yet so charming; he was the most favorite character.

For the romance part, The Psychopath had some USTs moments between the MC and Zane. I could say it was slow burn, although these two men also had felt their instant attraction the first time they met. But I absolutely liked how the kiss started at around 57% of the book and the steamy scenes followed much, much later. 😉

Overall, The Psychopath was a brilliant read, highly recommended. And I think I’m gonna read more books by Louise Collins after this.

What’s your opinion on The Psychopath novel? Please let us know in the comments below.