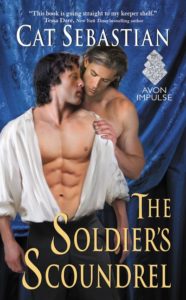 A scoundrel who lives in the shadows

Jack Turner grew up in the darkness of London’s slums, born into a life of crime and willing to do anything to keep his belly full and his siblings safe. Now he uses the tricks and schemes of the underworld to help those who need the kind of assistance only a scoundrel can provide. His distrust of the nobility runs deep and his services do not extend to the gorgeous high-born soldier who personifies everything Jack will never be.

A soldier untarnished by vice

After the chaos of war, Oliver Rivington craves the safe predictability of a gentleman’s life-one that doesn’t include sparring with a ne’er-do-well who flouts the law at every turn. But Jack tempts Oliver like no other man has before. Soon his yearning for the unapologetic criminal is only matched by Jack’s pleasure in watching his genteel polish crumble every time they’re together.

Two men only meant for each other

Ironically enough, I was actually more intrigued by the mystery aspect of this book rather than the romance. Jack’s jobs with Charlotte and the Wraxhalls took my attention and really kept me engaged. When Jack and Oliver went off to the countryside to gather information needed for the jobs, I found myself really enjoying the book. Towards the end, I wish I could’ve read more about the resolutions of these two jobs, but I understand that they, ultimately, are second priority to the romance and the relationship between the two main characters.

That’s not to say I didn’t enjoy the romance. I suppose, when I read this book, I just wasn’t in the mood for sex scenes. (Some of them I skimmed, go figure!) But the romance was great. The progression of Jack and Oliver’s relationship from lust to tender affection took some time and as such was very realistic. The two of them had to get to know each other first before falling in love, after all. There were a few bouts of miscommunication between them, but thankfully each instance got resolved relatively quick and there wasn’t any great angsty misunderstanding that stretched for a long while. Ultimately, it’s a character-driven story that has a helping of mysteries on the side. Read it for the romance, not the mystery!

What’s your opinion on The Soldier’s Scoundrel novel? Please let us know in the comments below.