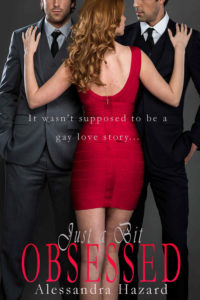 But what starts as animosity turns into something else. Something unexpected and very wrong.

It’s a recipe for disaster.

Just a Bit Obsessed is about Christian Ashford (the protagonist’s best friend in the previous book). Chris is invited by a partner named Mila to make a trio, he accepts for the simple fact that he is attracted to Alexander Sheldon, Mila’s boyfriend.

Alexander is constantly called the “perfect boyfriend” because he is the kind of guy who likes to have everything under control due to his turbulent childhood. However, when Christian comes into his life, the appearance of “perfect boy” disappears. Because in his interior arise emotions that he had never experienced before.

It’s quite pleasant to read this second installment of the series, the author gives a unique touch that makes you feel the same as the characters.

What’s your opinion on Just a Bit Obsessed novel? Please let us know in the comments below.