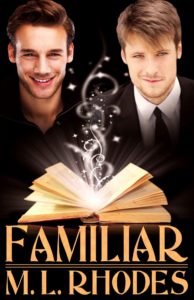 Emrys Andrews lives in the quaint New England town of Salem, Massachusetts. In school he was never part of the popular “in” crowd, but he always had good friends and was generally known as a fun-loving, nice-guy geek. A label that followed him into adulthood. He just has one little problem. A secret he’s managed to keep from his friends and the world in general. You see, he’s descended from a long, esteemed line of honest-to-goodness, magick-wielding witches. Which wouldn’t be so bad, except, while the rest of his family members totally rock the witch power, Emrys…doesn’t. Any time he tries to do magick, anything that can go wrong, usually does. He’s left a trail of magickal disaster in his wake all his life, so now, for everyone’s safety, he tries to avoid his powers at all costs.

David Jennings is everything Emrys is not—gorgeous, sexy, popular, athletic, and a perfectly normal non-magick person. Despite the fact Emrys is sure David’s out of his league, and possibly straight, all it takes is one look into David’s soulful blue eyes and Emrys is a goner. He keeps his crush quiet for years, however, because his magick is usually at its worst when he’s emotional or when his adrenaline is pumping, and around David, he can’t control either.

When an unexpected encounter finally throws them together, Emrys discovers he’s not the only one who’s been fantasizing from afar. David’s been harboring feelings for Emrys for years, too. Unfortunately, David’s family also has secrets. The kind that can get anyone who knows too much…very much dead. With David’s life on the line and his past doing its best to tear them apart and keep them that way, and magick the only apparent solution, Emrys has to get control of his power once and for all if he wants to save the man who’s always been his destiny. But the tricky part is, he can’t do it without David’s help…

This one is a pretty enjoyable book, though I did feel a bit of whiplash over how different each half of the book is with the other half. Familiar is divided into two parts – the first part tells the very detailed story of the night of David and Emrys’s high school graduation, while the second part tells the story of what happens three and a half years later. As you can tell, the first half of the book stretches a fair bit. Since it occurs over the course of one night, it may be seem a little too slow for other readers.

I did think the first part was a bit slow – but eventually I realized that it’s a single night that totally changes the lives of both David and Emrys, and as such, it’s important to talk about the night in its entirety. It explains the connection of the boys with each other, and also unfolds some much-needed backstory. The angst happens fairly early in the story too!

The second part, in contrast, I felt may have been a bit too rushed. Particularly the resolution of the long-standing problem that David faces. To me, it felt like it was a bit too clean of a solution; however, I didn’t mind it so much because David and Emrys really deserved their own happy ending, after all that they – particularly David – have been through. The second part also contains a lot of sappy moments between the two, and at times it did feel like they were a bit too sappy for two manly guys. But, again, given the circumstances, I felt like it was understandable.

Overall, a pretty enjoyable read! I would’ve classified this as closer to new adult given the ages of the protagonists, but there’s a bit too many sex scenes and as such I think this falls squarely into the adult category. David and Emrys are really likeable main characters, and they work quite hard for their own happy ending.

What’s your opinion on Familiar novel? Please let us know in the comments below.