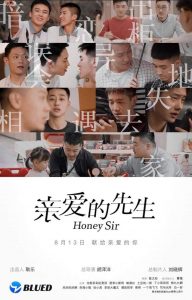 This short series was so great. I was not expecting to like it this much. Seeing how the episodes are all only about 20 minutes long I thought it would be a good one to start dipping into a few BL series and I am so glad it was a good one too.

I should note that although in the description of the playlist I linked here it says ‘ongoing’, the series is complete. I think there was a misunderstanding at some point where it wasn’t certain if there were going to be 7 or 8 episodes, but there are only 7, the last one airing in September 2020. Judging by the last episode it is pretty clear no more are coming, unless they decide to make a second season at some point.

Every episode features a different couple and a different situation and I thought that is a great idea for a series. One episode deals with coming out, another deals with first love, another with long distance and so on, and they are so well made. The acting is very good, I liked everyone and the series made me feel happy, sad, and gasp out loud.

Since the episodes are so short and a lot is packed into each one, I was expecting them to be rushed, but they didn’t give me that impression. Only one episode felt a little exaggerated, but that might have had more to do with one of the characters rather than the pacing of it.

Bottom line, I enjoyed watching Honey Sir and I warmly recommend it.

What’s your opinion on Honey Sir movie? Please let us know in the comments below.