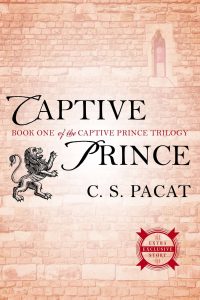 Summary: Damen is a warrior hero to his people, and the rightful heir to the throne of Akielos. But when his half brother seizes power, Damen is captured, stripped of his identity, and sent to serve the prince of an enemy nation as a pleasure slave.

Beautiful, manipulative, and deadly, his new master, Prince Laurent, epitomizes the worst of the court at Vere. But in the lethal political web of the Veretian court, nothing is as it seems, and when Damen finds himself caught up in a play for the throne, he must work together with Laurent to survive and save his country.

For Damen, there is just one rule: never, ever reveal his true identity. Because the one man Damen needs is the one man who has more reason to hate him than anyone else…

First of all I have to point out that I’m going to refer at this trilogy as a single book. When it was recommended to me I downloaded all three books and read them one after the other without pause, so I really don’t know what happened specifically in each book.

That being said, and if it wasn’t a clue already, I absolutely enjoyed Captive Prince. It’s been a while since I read it on the tiny screen of my phone, but this book still makes me go a bit mellow.

What I first noticed is how well C.S. Pacat chose the names for the main characters. They are perfect for their position and personalty and I think it’s really hard to pick such fitting names for your characters, so +1 right from the start from me.

Then the setting is original, nothing that I saw anywhere else, not even similar. I don’t know what C.S. Pacat’s inspiration was, but awesome job right there! In the books there are depicted two very much opposed cultures which I also think formed a pretty neat symmetry. And I was just as surprised as Damen (Damianos) was to observe what was going on in the first few chapters of his captivity.

Then there’s everything else that goes on, intrigue, plot twists, expectation. Captive Prince really keeps you interested and wanting to read more. I know I did, couldn’t wait to get home from work and just read.

Captive Prince really is a good book. Great even. And if you like fantasy type of books with a dash of drama and war, go right in!

What’s your opinion on Captive Prince novel? Please let us know in the comments below.