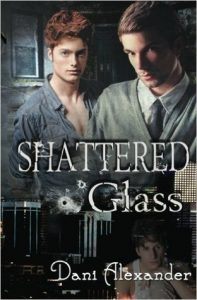 Summary: Austin—seems to have it all. At least on the surface. A loving fiancee. A future with the FBI and a healthy sized trust fund. He also has a grin and a wisecrack for every situation. But the smile he presents to everyone hides a painful past he’s buried too deeply to remember. And his quips mask bitterness and insecurity. Austin has himself and most of the whole world fooled. Until he meets someone who immediately sees him better than he sees himself.

As events unfold and Austin’s world unravels, he finds himself pushed into making quick life-changing decisions. But can he trust Peter or what’s happening between them when each meeting seems to be just a series of volatile reactions?

I have mixed feelings about this novel. For the most part I liked it. There are some things that I didn’t enjoy, it was a bit hard for me to get into it, but most of all I disliked the chapter titles or sub-chapter title or whatever they were, I’m not sure due to formatting. I tried to ignore them and not read every bolded title looking line as they usually hinted to what was going to happen next and took so much from the joy of reading and discovering by myself what was going on. My rating would have gone way higher if those were not there.

I don’t feel strongly for any of the characters, but I liked them. I liked how Austin was so open to his newly discovered sexuality, how he objectively thought about it and how he explained his repression. I am tempted to say that he might have accepted it a little too fast given his years of ignoring it, but what do I know.

When it comes to Peter, he is bold and funny. My initial impression of him didn’t quite match the one later in the novel, but that might have been me being influenced by another novel I read a while ago. I’m not complaining, though, he is okay. And I say okay because, I’m not sure what it is, I can’t put my finger on it, but I feel their personalities, both Austin and Peter’s, kept shifting a little throughout the novel, barely, but enough to make me wonder what’s going on.

There are two sequels in the series, but I am not reading any of them. The first book didn’t make me want to know more. If I’m not mistaken the main characters of the sequel are not Austin and Peter, but they appeared in the first novel. I think Austin and Peter might be around in the second novel as well, but I am not curious about it.

What’s your opinion on Shattered Glass novel? Please let us know in the comments below.