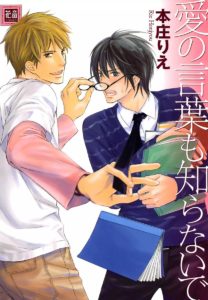 Summary: 1-3) What is Love?
Kojima, the Vice President of the Student Body, always strives to be on the #1 spot in school. He normally gets along with the carefree Kurata… until one day Kojima snaps and forces Kurata to have sex with him. So starts their S&M relationship or is it love…?

4-6) You are the Worst
Hiroto and Kota’s parents suddenly got married and the pair are forced to play nice and be the perfect brothers to each other, but will it really work?

7) Give it All to Love
Kaji talks about his type.

This is one of those stories/series that reads well on it’s own, but I’m also sure it makes more sense to read the entire series. Needless to say I read this one first and it did get me curious enough to want to read the sequel and prequels.

The story is rather cute and funny, and has a pretty good combination of sex, romance and humor. Kurata is the carefree type so he tends to have that laid back attitude, yet also knows how to push Kojima’s buttons. Kojima is that blend of cute, but more in the sense that he takes himself way too seriously and because of that it makes him awkward. The two make for a rather cute couple since both are the awkward teenagers but it’s rather cute and makes them a bit more relatable, even if the stereotypes and cliches are there. Which they are, but it’s not as overt as the typical BL in this vein.

The story does start out rather strangely since the beginning focuses on the fact that Kojima feels guilty that he hit and hurt Kurata, which leads to the first part of the story being a bit uncomfortable and curious as you don’t really know what is going to come of it until the truth is flushed out about their relationship.

Some of the stuff that didn’t make sense, or was rather strange was made up by the fact that you can tell the two of them actually do care about and love each other, but that Kurata likes to push Kojima’s buttons and doesn’t seem to mind it when Kojima lashes out at him (he actually seems to enjoy it a bit) and that Kojima despite enjoying dominating Kurata does in fact love and care about him, and actually doesn’t want to hurt Kurata because he loves him.

I’m not usually into yaoi that deals with S&M, or slave/master, or domination, but I think what made this work, was the fact that Kurata and Kojima treated each other as equals, and that neither wanted to be a jerk to the other. I liked that it wasn’t the typical or “traditional” dynamic to that kind of a relationship that plays out in so many of these stories.

As I mentioned this story is not without cliches or stereotypes, but what I liked about it was that the characters were human, and rather relatable in their awkwardness which just added to the charm.

The second story while dealing with the “secondary” couple (because they are the main couple in the previous manga) doesn’t focuses more on a sweeter relationship in which the characters work out their problems rather than the tiresome drawn out drama for the sake of drama theme.

What’s your opinion on Ai no Kotoba mo Shiranaide manga? Please let us know in the comments below. 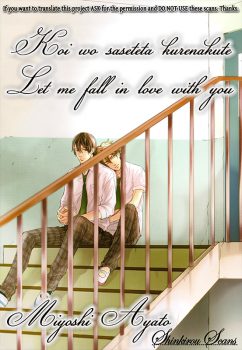