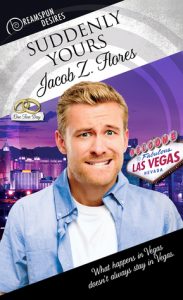 Summary: What happens in Vegas doesn’t always stay in Vegas.

Cody Hayes is having one epic morning-after. The hangover following a Vegas bachelor party is nothing new to him, and neither is the naked man in his bed.

His apparent marriage is a different story.

Carefully plotting every detail of his life carried Julian Canales to a Senate seat as an openly gay man. A drunken night of Truth or Dare isn’t like him… and neither is marrying a man he just met. He’d get an annulment, but the media has gotten wind of his hasty nuptials. If Julian’s political career is going to survive, he has to stay married to a man who’s his opposite in every way.

Now he must convince Cody that all they need to do is survive a conservative political rival, a heartbroken ex, their painful pasts… and an attraction neither man can fight.

When I first started reading this I knew I would like it. The book started off funny and a bit intriguing. I mean, what bad thing can happen in Vegas, right?

Well, everything, but everything good can happen too.

Reading, seeing how things developed and checking the length of the book, I wasn’t sure how everything will fall in place. At some point I even thought I might have a version that’s missing a few pages, but isn’t that what’s great about books?

Cody and Julian are both adorable and they are definitely perfect for each other. More than you’d think.

I did like this book, but that doesn’t mean there weren’t some parts I didn’t enjoy as much. I wasn’t always the biggest fan of Julian and his media advisor (that was supposed to be this tough lady) and I think some things were a bit forced. Still, that didn’t stop me from reading this book in just two days (would have been just one, really, but jobs tend to get in the way).

I also wouldn’t have minded for Suddenly Yours to be a bit longer and take it more slowly. I feel like some things were a bit rushed and oh boy, they could have been some great anxiety inducing scenes. I wouldn’t have minded more background on the characters either (which I was expecting from Jacob Z. Flores after reading 3). But well, I’m glad with what I get in this case.

Additionally I couldn’t help but notice that Jacob Z. Flores follows some patterns in his books (despite this being just the second one I read) and I usually don’t have a problem with patterns, but in this book it kinda jumped at me and I feel like that took something away.

Despite the things Suddenly Yours lacked and that could have been better, I’m still going to give it a high rating because it really made me laugh.

P.S.: This is the second book of a series, but except being part of the same series there doesn’t seem to be a connection. I didn’t read the first one, but the only connection I can think about would be the wedding, might be the same in both books, but don’t quote me on that.

What’s your opinion on Suddenly Yours novel? Please let us know in the comments below.