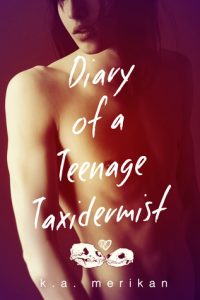 Novel: Diary Of A Teenage Taxidermist

Summary: Ethan is a levelheaded, some might say ‘antisocial’, young artist-entrepreneur with a love for quirky taxidermy. He is close to graduating high school and at a crossroads. All he wants is to develop his business further, yet all his parents want is for him to go to law school. That is more than enough problems for Ethan, so any kind of love life is off his agenda. That is until Robert Hunter, the quarterback of the football team, comes crashing into him. Literally.

Robert drifts along in high school. He has good grades, he’s getting ready for med school, he’s even leaving potentially problematic dating until college. He’s gay, not ashamed of it, but he doesn’t want to stir up any trouble. His carefully laid plans might just go completely off the rails though, when he drinks too much at a party and causes irreversible damage to Ethan, the school’s weirdo.

Robert has to face the fact that maybe he isn’t the good guy he always considered himself to be. And maybe he doesn’t want to go to med school. And maybe, just maybe, he doesn’t actually want to wait with dating until college.

What do we get when a jock and a school freak crossed paths? The folly of youth. That was how the story started. Ethan Merrick and Robert Hunter might have “officially” met as a result of a tragedy but Ethan’s idea for a payback definitely opened up a whole different can of worms. Nevertheless, their love story had to start somewhere.

To be honest, this book was not the best; I especially could do without the spelling errors. However, I had to give it some credit for being slightly more original than most high-school-jock-and-goth love story out there by featuring elements of taxidermy and non-traditional take on college-after-high-school path.

I won’t suggest this book to PETA supporters though, because even I had problems with the mental image of pesky rodents being hunted for art (thankfully none of it was actually described). That point aside, I liked the idea of new adults finding courage to venture into a risky future and fight for something they believe in. I also loved the insecurities, the awkwardness and the struggles both characters faced as they discovered themselves and explore their sexuality for the first time.

Despite not being the best literary find, I would still recommend this book for the characters’ almost-unique qualities, plot with no unnecessary drama and a story that didn’t bore me.

Also, a Kindle Edition of this book has been re-published in June 2020 under a new title, Not Like Other Boys with a prettier cover. I just hope they double checked the spellings this time.

What’s your opinion on Diary Of A Teenage Taxidermist novel? Please let us know in the comments below.