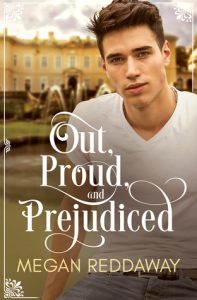 Novel: Out, Proud, and Prejudiced

Summary: Quick-tempered Bennet Rourke dislikes Darius Lanniker on sight. Darius may be a hotshot city lawyer, but that doesn’t give him the right to sneer at Bennet, his friends, and their college. It doesn’t help that Bennet’s restaurant job has him waiting at Darius’s table. So when his tutor recommends him for an internship at Darius’s Pemberley estate, Bennet isn’t sure he wants it. He’s also not sure he can afford to turn it down.

Darius is a fish out of water in the small college town of Meriton, but something keeps pulling him back there. He’s helping out a friend with business advice, nothing more. If he’s interested in Bennet, it’s not serious. Sure, Bennet challenges him in a way no other man has. But they have nothing in common. Right?

Wrong. Their best friends are falling in love, and Bennet and Darius can’t seem to escape each other. Soon they’re sharing climbing ropes and birthday cake, and there’s a spark between them that won’t be denied. But betrayal is around the corner. Darius must swallow his pride and Bennet must drop his prejudices to see the rainbow shining through the storm clouds.

*Obligatory I didn’t read Pride and Prejudice, so I can’t compare this novel to the original.

What a ride! I can’t remember the last book that made me feel so anxious and so frustrated with the characters. I knew where this was heading, of course I did, but that didn’t take away from the frustration. Most of it was because of misunderstanding and while I would normally have a huge issue with the characters not talking about what was going on, it made perfect sense here. It fit the story, and it fit the character’s personalities so I have no complaints.

What I may complain about is that some things were superficially explained—some of the situations and a part of Jamie and Tim’s relationship—but the frustration kept me occupied enough to not be too bothered by it. And, boy, I can’t express just how much of that there is. I literally had to remind myself that there are always two sides of a story otherwise I would have dropped the book so hard. (No, I wouldn’t have, at this point I was so into it, I had no option but find out what happens next.)

I didn’t like almost anyone except for Jamie, Bennet and, only later, Darius. I didn’t see much of Tim, he seems like an okay guy, but he was a fool.

I liked Jamie and Bennet’s friendship, Bennet was the only one out of their friends who actually got Jamie, who didn’t make any idiotic jokes and accepted his principles as a fact. They all should have. Bennet also was willing to give up on what he wanted in order to not hurt Jamie and that is a great friend.

I didn’t like Bennet so much at first, but after the first five chapters or so I warmed up to him. He’s clever and a generally good guy, despite deeply prejudiced. Luckily there is a cure to prejudice, so no harm done.

Darius was by far the most frustrating character. Not knowing why he acted the way he did or what he was thinking made it really easy to misjudge him. I still wanted his side of the story, but man, it was tough.

As for the other characters, Philippe and Nigel were great, I instantly disliked Leon and Kofi (and I mean instantly) and while I kind of liked-but-not-really Charlotte in the beginning, in the end she was having a bad attitude and making bad decisions. I’m surprised some of the characters weren’t bothered by it.

Overall I liked the take on the plot (), it was good. I liked the rock climbing as a means for the characters to interact more, and for most part it made sense. It also mentioned some heavy themes () and I’m not sure how to feel about that. Normally it’s not an issue for me reading about this kind of themes, but in this case I think it could have been replaced with something less weighty. I’m 50/50 on this.

I would still say to give the book a try if only for the anxiety and the frustration. And, obviously, if you are a fan of the original and would like to try a retelling of it. Might not make it to your favourites, but it’s still a pretty good read.

What’s your opinion on Out, Proud, and Prejudiced novel? Please let us know in the comments below.