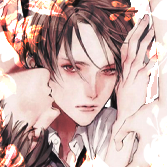 Okay, it seems that for today I only have enough of strength to read and review your entries. I'm sorry, but yesterday I had a night-shift, and today I still feel like having a head full of cotton and