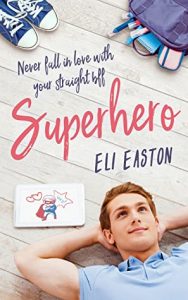 Summary: It’s not easy for a young gay artist like Jordan Carson to grow up in Jefferson, Wisconsin, where all anyone seems to care about in middle school and high school are the sports teams. But Jordan was lucky. He met Owen Nelson in the second grade, and they’ve been BFFs ever since. Owen is a big, beautiful blond and their school’s champion wrestler. No one messes with Owen, or with anyone close to him, and he bucks popular opinion by keeping Jordan as his wingman even after Jordan comes out at school.

Their friendship survives, but Jordan’s worst enemy may be himself: he can’t seem to help the fact that he is head-over-heels in love with a hopeless case—his straight friend, Owen. Owen won’t let anything take Jordan’s friendship away, but he never counted on Jordan running off to find a life of his own. Owen will have to face the nature of their relationship if he’s to win Jordan back.

I’ve read a lot of Young Adults books, and this is one of the nice ones. The story is uncomplicated – childhood friends, one gay, one straight, “supposed” unrequited love and finding oneself. I don’t usually like sports-themed stories, but I found wrestling as an additional setting for this book an interesting touch. It was a good reminder that not all jocks play (American) football.

I liked how the story started with how Jordan and Owen met. They were two young boys who blossomed through friendship. I liked how there are hardly any “villains” in the story and instead of fighting with people, the two characters were struggling with other more significant issues such as acceptance, doing the right thing and growing up. Those were quite typical for this genre, but at the same time they were more relatable.

I preferred if there is only one p.o.v for this story, although being able to see things in both Jordan and Owen’s perspectives are not really a bad thing. I also think that Jordan and Owen had a relatively easy time “coming out”, but let’s face it, not everyone had the Hollywood-type of drama in this situation, so I rather liked it. Also, do not expect any steamy love making in this book. I found that clumsy, slightly awkward first time fitted this story well.

All in all, I enjoyed it. I’ve read the author’s work before but I have to say this one is better than the other. Superhero gives out youthful vibes through the writing (translation: the author didn’t try hard to fit into a teenager’s shoes by sprinkling phrases like “bruh” or “awesomecakes” every few pages). If you like some light reading, do add this book to your reading list.

What’s your opinion on Superhero novel? Please let us know in the comments below.