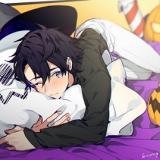 By hal7283, September 9 in RolePlaying Arena