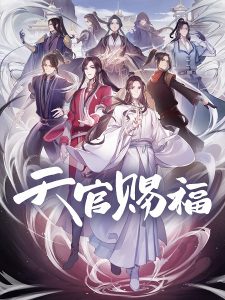 Summary: The heavens shake, the thunder rumbles, and Xie Lian appears with an apologetic smile—again! Eight hundred years prior, he was a beloved martial god, known as the Crown Prince of Xianle. Now, he ascends to the heavenly realm for the third time, but simply as a pitiful scrap-collecting god with no followers behind him.

On his first mission, Xie Lian finds himself alone in the dark moonlit night. There, a gentle man dressed in red guides him through the forest. However, as abruptly as he appeared, the man suddenly dissipates into a swarm of silver butterflies.

Xie Lian later learns that this mysterious stranger was none other than Hua Cheng, the Crimson Rain Sought Flower, a Ghost King feared by both demons and gods alike. But before Xie Lian can figure out why Hua Cheng would help a Heavenly Official like himself, he meets San Lang. A young man possessing great knowledge on not only the Ghost King, but also the now forgotten Crown Prince, San Lang decides to accompany Xie Lian on his journey of unveiling the mysteries of the past.

Adaptation based on a Chinese web novel of the same name, written by Mo Xiang Tong Xiu (墨香铜臭). The show falls into the xianxia genre (a fantasy genre influence by Taoism, Buddhism, and Chinese mythology).

I did not expect how much I would enjoy watching this. Truth be told, I don’t have a lot of experience watching animations other than Japanese anime and the occasional Western animation, so TGCF was a pleasant surprise.

Although the screen time between the main characters – Xie Lian and Hua Cheng/San Lang was roughly around 85% in the span of 11 episodes, it didn’t feel like there was any void between them. From my research, there are more interactions in the novel, but although the intimacy aspects are limited in the animation, I’m still very fond of their relationship. It didn’t take much to see how Hua Cheng/San Lang adores Xie Lian and vice versa from the way they look at each other and how soft their voices changed when they communicate compared to when they were talking to someone else. No doubt I wish to see more romance, but it almost felt pure that it suited them (couldn’t say the same about the manhua or novel).

Seeing that it was only adapted into a short series, the plot was incomplete. Viewers are left to wonder about what happened to the boy with the face disease, since it was never resolved. The animation also didn’t cover much about Hua Cheng’s past and only touch-base with Xie Lian’s history. Regardless, it was a really fun series to watch and I loved the humor as well. I don’t really understand the ending, but I’m guessing the novel and manhua would reveal more, so I’m going to look for both.

Overall, I think despite TGCF being a very, VERY mild BL animation, it is worth watching and highly entertaining. I think the voice actors did a splendid job too. Color me impressed.

What’s your opinion on Tian Guan Ci Fu anime? Please let us know in the comments below.