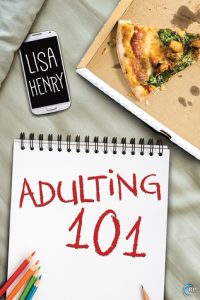 Summary: Nick Stahlnecker is eighteen and not ready to grow up yet. He has a summer job, a case of existential panic, and a hopeless crush on the unattainable Jai Hazenbrook. Except how do you know that your coworker’s unattainable unless you ask to blow him in the porta-potty?

That’s probably not what Dad meant when he said Nick should act more like an adult.

Twenty-five-year-old Jai is back in his hometown of Franklin, Ohio, just long enough to earn the money to get the hell out again. His long-term goal of seeing more of the world is worth the short-term pain of living in his mother’s basement, but only barely.

Meeting Nick doesn’t fit in with Jai’s plans at all, but, as Jai soon learns, you don’t have to travel halfway around the world to have the adventure of a lifetime.

This is not a summer romance. This is a summer friendship-with-benefits. It’s got pizza with disgusting toppings, Netflix and chill, and accidental exhibitionism. That’s all. There are no feelings here. None. Shut up.

This is without doubt the funniest novel I read this year. It had me in stitches from the very first page. Nick and Dev’s bromance is the best bromance there ever was. They are the best of bros and simply adorable. This is what true love looks like. Only in pure bro form.

Even the synopsis makes me all fuzzy and giggly now after I read the book.

So, okay. Nick is the perfect portrayal of an anxious teenager who has no idea what he’s supposed to do next. And I should know, I’ve been there. Kind of. He is incredibly bold and shy at the same time. He is very smart and lacks confidence. He is a nerd and a twink. He is all kinds of contradictions and all these makes him so adorable and hilarious and, and, he’s just great, okay. Gosh, he’ll grow up into a wonderful man.

Jai is confident and hot and relatable. He’s the type who got to see and learn things on his own, he rebelled, packed his bag and off he went to see the world. He doesn’t want to settle, can’t be tied down so he is pretty much itching for the next adventure. I liked him so much, his calmness and his support. He is all and so much more than Nick probably dreamed of.

Lisa Henry does an outstanding job at presenting the start of Nick and Jai’s no-strings-attached/friends-with-benefits/definitely-no-feelings-at-all relationship, as well as Nick’s worries and internal struggles about what lays ahead of him: college life and being apart from Devon. He is definitely just a kid, but I feel like he grew up a lot right in front of my eyes, with every turn of the page.

I loved the dynamics of both Nick’s and Jai’s families, very different, but both tight and caring. Nick’s parents did everything right, they had Nick’s best interest in mind at all times and they really did a great job. Jai’s family is more laid back because of obvious reasons (once you read the book), but they are still ready to support each other no matter what.

I’ve run out of words. Adulting 101—awesome read, I loved it so much!

What’s your opinion on Adulting 101 novel? Please let us know in the comments below.