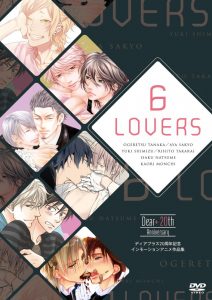 Summary: The July issue of Dear+ has announced that a series of manga serialized in the magazine will get anime adaptations in celebration of the magazine’s 20th anniversary. These anime will be collected into an “in motion” animation series titled 6 Lovers.

Full disclosure I waited so long for this OVA and my expectations were so high. Since 2017, when the OVA was first announced, they kept pushing the release date until they settled for February 2021. I was so happy, finally we can watch it, but I was deeply disappointed. I am going to review each episode since there are only 6 and they are all so short, and there are going to be spoilers so read at your own risk. I’m spoiling this OVA because it’s not really worth watching, not even the length makes it better.

[Ep. 1] Renai Ruby no Tadashii Furikaya by Ogeretsu Tanaka
This is one of the mangas featured in this anime that I read, but I can’t remember the couple here. It being a side story it’s not surprising for me to not remember them since I usually pay more attention to the main couple of a manga and don’t really connect to side characters. That being said, the first episode was so cute. A cute little ‘meet my family’ short. I still don’t care much for the characters since I don’t have any background on them and I don’t know them, but as enjoyment goes, I did like it and it was really cute.

[Ep. 2] Kuroneko Kareshi no Aishikata by Ayane Ukyou
Was this manga as disturbing as this episode? It’s been a really long time since I read the manga, but now that I think about it… I think it was just as disturbing… The very first seconds made me feel so uncomfortable, I didn’t like it. Watching this might have been a mistake.

[Ep. 3] 是―ZE― by Yuki Shimizu
I didn’t read this manga. The episode probably wouldn’t have been as weird as it was if I would have read it. Without any kind of context here’s what I watched: two guys go and see a beautiful flowering tree. One of the guys has a vision of some sort or a flash of some sort that shooks him so hard he passionately kisses the other guy and they end up having sex right there, in the middle of the day, where people may or may not pass by. Then they just share a moment where the second guy says he always wants to go seeing flowering trees with the other. (Is it because of the sex? It’s the sex, right?) So, um… Yeah. That happened. What the f?

[Ep. 4] Ten Count by Rihito Takarai
I liked this manga, I don’t remember the side story in this episode, but it’s a cute one, Kurose joking around with Shirotani. How Shirotani believed him, I don’t know. He probably wanted to believe him. Anyway, the episode doesn’t come even close to what I hoped. I’m… dejected.

[Ep. 5] Ameiro Paradox by Isaku Natsume
Another one I didn’t read and… What just happened there? So these two guys are working, they are on a stake out of some sort, but they get distracted and have sex instead. Okay, whatever, but at the end it is revealed that one of them recorded the sexual act without the knowledge of the other? Did I get that right? Well, this one is a manga I sure do not want to ever read.

[Ep. 6] Seitokaichou ni Chuukoku by Monchi Kaori
Didn’t read this one either, but I might think about it now. The episode was cute enough, two guys going on a date. It was nice. I guess this makes it two out of six episodes that I liked.

Overall the OVA is underdeveloped, it does no justice to the mangas featured (including the ones I didn’t read because a lot of readers must like them since they got picked for the OVA) and after watching it I felt like someone played a prank on me.

What’s your opinion on 6 Lovers anime? Please let us know in the comments below.