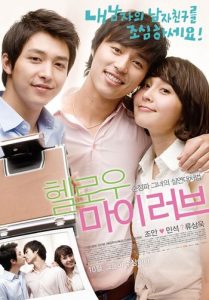 Summary: Ho-jung is a scriptwriter in a local radio station. She is waiting for her 30th birthday and also eager to be promoted as a DJ of her own program. She is also waiting for her boyfriend, Won-jae, to come back from France and fulfil his promise of proposing to her. Won-jae returns from his studies and brings a friend, Dong-hwa, with whom he’s planning on opening a restaurant.

This movie made me so, so, so angry. I started writing a rage fuelled review after 20 minutes of watching it. Then I calmed down, decided that it’s not worth even writing about it, but then here I am, thinking that, well, I watched it, let’s write a review after all. Why not. I can be calm despite what I think about it, so here it goes.

I absolutely disliked Ho-jung. I was baffled, couldn’t believe my eyes what I was seeing. Ho-jung has questionable (at best) morals, she encourages her listeners to get their boyfriends drunk and slip them pills in order to get them back to their places and in their bed. She also takes sides and claims some things she later proves to be against of and is not shy of leading someone on despite fully knowing she won’t return their feelings.

Won-jae is understandably afraid of coming out as gay (because somehow in some movies bisexuals don’t exist, never heard of them), but that doesn’t excuse leading Ho-jung on for over two years with the promise of marrying her when he comes back from studying in France.

Dong-hwa, Won-jae’s friend that he brought with him from France, is a cheating prick, and I’m sure I would have found more things to be pissed about at him for if he would have been in the picture long enough, but as things are, Ho-jung is the main character and we mostly get to see her screw ups.

As for the supporting characters, Ho-jung’s friend (forgot her name) is an instigator, Moon-ki (Ho-jung’s superior) is a jerk, and Jin-young (Ho-jung’s co-presenter) is the only one I actually liked. She is the only decent one  in the whole movie.

Ho-jung is so excited for Won-jae’s return and as she meets him at the airport, it becomes clear she did not know about Dong-hwa coming with him. The boys are quick to start opening their restaurant, with Won-jae being a cook and Dong-hwa a sommelier, all the while Ho-jung dreams about the incoming marriage proposal.

One evening it becomes apparent to Ho-jung that Won-jae and Dong-hwa are more than friends and weeks of crying and pointing fingers ensues. I actually appreciated Won-jae apologising (or trying to) and admitting he did the wrong thing by not being honest to Ho-jung and for deceiving her. Meanwhile Ho-jung, despite her accusatory words and pain, is not ready to give up on him and tries to get him back and, at her friend’s suggestion, to “make” Dong-hwa straight (?? I don’t even know. Because, again, bisexuality is a myth and he just didn’t find the right girl. blargh)

A lot is happening next, Ho-jung, Won-jae and Dong-hwa seem to have a pretty good relationship for a while, but things get complicated, people get outed and relationships come to an end and dreams are stomped to the ground in a cloud of worry and pain. It’s not good.

There is some sort of character growth for Ho-jung, surprisingly, but I don’t feel like it’s enough. She did a lot of damage and she doesn’t seem to realize that. She acted like a spoiled brat. Her “boyfriend” Won-jae quickly fell into the disliked category by not doing the right thing and acting like a powerless, self-pitying man and looking for the easy way out. As for Dong-hwa, he was pretty much the least affected by the whole thing.  He had a cushion to fall on.

And in the end, I’m not even sure what exactly happened to Won-jae, how he coped with everything, what he decided to do. It’s all a mystery. I have some idea about the other two, but not him. As for the actual end of the movie, I kind of get it and kind of not. I don’t know if they are going to be able to maintain some sort of relationship, if they understood what they did or if they ignored it entirely. The worse part is I’m not even curious about it. I’m ready to move on to the next (hopefully) better movie.

What’s your opinion on Hello My Love movie? Please let us know in the comments below.