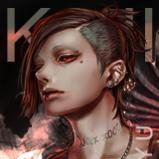 The Wind No Longer Touches Your Skin